Understanding the Catholic Teaching on Communion

One of the most distinctive (dare I say, “fundamental?”) differences between Catholicism and Protestantism is the celebration of Communion. While both denominations observe Communion as a recreation of the Lord’s Supper, they differ on several points:

In this article, we’ll briefly explore the origin of the Eucharist and touch on the frequency of observance. I’ll then cover transubstantiation in a bit more detail, as well as the role of the Eucharist in salvation.

Observance of the Eucharist is in keeping with a command given by Christ before his death and resurrection.

In each of the first three Gospel accounts of the Last Supper, Jesus gave thanks for the bread and then broke it. After giving a piece to each of his disciples, Jesus told them, “this do in remembrance of me [emphasis added] (Luke 22:19).”  He then gave them wine as well. In Paul’s epistle to the Corinthians, he wrote, “After the same manner also he took the cup, when he had supped, saying, …this do ye… in remembrance of me [emphasis added] (I Corinthians 11:25).”

Catholics typically observe the Eucharist at least once per week, in keeping with tradition dating back to the earliest churches. In Acts 20:7 and I Corinthians 10:16, we see that the reason the disciples got together on Sundays was for the purpose of “breaking bread.” In AD 150, Justin the Martyr  wrote in First Apology:

“But Sunday is the day on which we all hold our common assembly, because it is the first day on which God, having wrought a change in the darkness and matter, made the world; and Jesus Christ our Saviour on the same day rose from the dead. For He was crucified on the day before that of Saturn (Saturday); and on the day after that of Saturn, which is the day of the Sun, having appeared to His apostles and disciples, He taught them these things, which we have submitted to you also for your consideration.

With that said, I should note that the Catholic Church teaches that we should receive the Eucharist at a minimum of once per year, typically around the Easter season. That would keep the believer most closely aligned with the spirit and letter of Christ’s command to “do this in remembrance” of him, since the original Last Supper took place just before the Crucifixion.

Just an aside, it is somewhat ironic that Protestant branches such as Baptists and Methodists use grape juice instead of wine because they disapprove of alcohol, yet claim to adhere to a literalistic interpretation of the Bible.  I brought this up to Uncle Richard one time, who responded by saying that “wine was weaker in Biblical times.” Nonsense! This claim has been thrown around by prohibitionists for decades. The problem is, there’s no historical basis for it. First of all, the process for making wine is the same now as it was 2,000 years ago. Second, if the alcohol content of wine was so low that no one could get drunk, why does the Bible admonish us against drunkenness? Catholics United for the Faith has a great piece on this subject, and you can read more here. 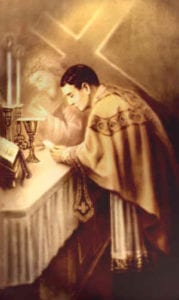 We understand the importance of partaking of the Eucharist on a weekly basis. But what about the argument as to whether it’s the body and blood of Jesus or just a symbol? Let’s start by examining again Jesus’ words at the Last Supper.

Although he often spoke in parables, Jesus was not doing so when it came to instituting the Eucharist. When he broke the bread he said, “this is my body which is given for you  (Luke 22:19).” He then gave them wine and said, “this is my blood of the new testament, which is shed for many for the remission of sins (Matthew 26:27-28).” How do we know that he wasn’t speaking symbolically?

First, consider his statement that his blood would be “shed for the remission of sins.” All denominations of Christianity agree that his blood was indeed shed for just such a purpose.

Second, consider the fact that this teaching caused a lot of Jesus’ disciples to abandon him during his ministry. He told them at Capernaum that, unless they ate his flesh and drank his blood, they would not have eternal life. If you read John 6:30-66 closely, you’ll see that the Jews first understood Jesus to be speaking metaphorically when he told them that he was “the bread of life.” He had to clarify it, telling them that they had to eat his flesh and drink his blood. It was this new literal understanding that offended quite a few of them. Jesus never bothered to assuage their offense, either. In fact, quite a few of them abandoned him! Jesus didn’t even try to call them back and say, “Ha-ha, just kidding. I was speaking metaphorically.” Because he wasn’t!

If we accept that Jesus wasn’t deliberately leading his disciples astray, we are left with no choice but to take him at his word.  If, on the other hand, we think he was just kidding… well, what else was he kidding about?  Needless to say, as Christians we accept that what the Lord told us was true and that he did indeed desire to lead us to Heaven.

A note on transubstantiation:  this is one of the sacred mysteries of the Catholic Church.  If you were to hold what had been the bread (also known as the host) in your hand after the consecration, it would have all of the outward appearances of bread.  Yet, we understand that the underlying reality, or substance, of the host has changed so that his body, blood, soul, and divinity are all present.

If I had only ever read the Bible with no exposure to religion, it would have been much easier for me to accept the real presence of Christ in the Eucharist.  Ironically, being raised in the literalistic Baptist faith made it harder to understand what Jesus so clearly said.  I am happy to say that, while I don’t fully understand how it happens — it does defy our current scientific understanding — I do believe that it happens.  I am so grateful that I was led to the Catholic Church!

It’s not enough for us to say the sinner’s prayer, repenting of our sins and accepting Jesus as our Savior.  Sadly, our Protestant brothers forget what Jesus said of baptism just 11 verses before John 3:16: “except a man be born of water and of the Spirit, he cannot enter into the kingdom of God. (John 3:5)”  And of the Eucharist in John 6:54: “Whoso eateth my flesh, and drinketh my blood, hath eternal life; and I will raise him up at the last day.”

It’s all right there in the Bible.  We just have to hear and believe.